The worst-case complexity of NFA to DFA conversion is O(2N) of sets of states. The DFA can have exponentially many more states than the NFA in rare cases.

Construct a transition table TransitionD. Each DFA state is a set of NFA states. TransitionD simulates in parallel all possible moves N can make on a given string.

Operations to keep track of sets of NFA states:

ε Closure (T):
Set of states reachable from any state in set T via epsilon.

move (T, a):
Set of states to which there is an NFA transition from states in T on a symbol a.

Following algorithm shows a computation of ε -Closure function.
Push all states in T onto stack.
initialize ε-Closure (T) to T
while stack is not empty
do pop top element t
for each state u with ε-edge
t to u
do If u is not in ε-Closure(T)
do add u ε Closure (T)
push u onto stack 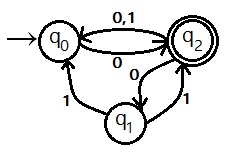 Construct the equivalent DFA of the NFA given in figure (1).
Step 1: Transition Table of NFA from Figure (1):